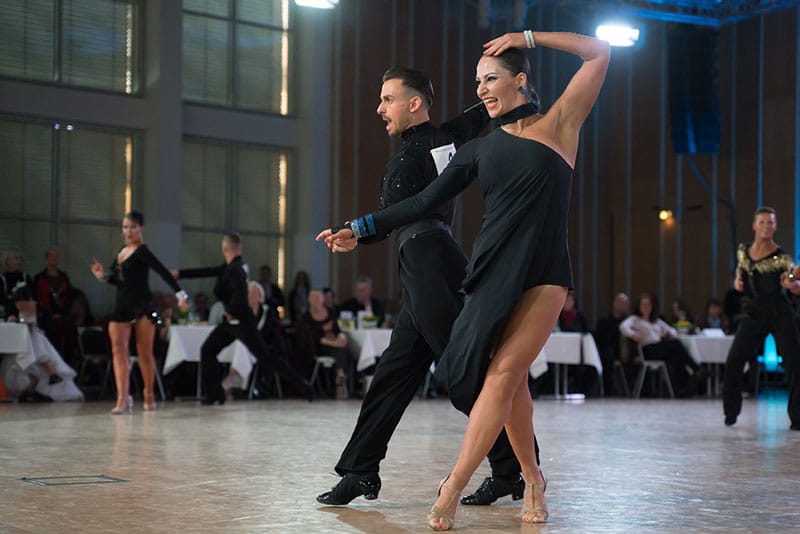 Domenico Franzo is 28 years old, lives in the Northern Black Forest region, and leads a double life. A life devoted to dancing…and selling high-quality glasses. By day, he works for the eyewear manufacturer Lunor, selling its products all over the world. By night and at the weekends, he dances competitively at championship level in Germany. Over the years, he has realized just how well these two lives complement each other.

Deafening samba music blares out as I enter the dance hall, triggering an almost irresistible urge to dance. I half expect to be greeted by that scene we know from the commercials – a lively crowd at the bar, grooving to the beat as they sip their rum and Cokes. But instead of a Cuban party crowd, the only other people in the huge hall are two dancers – a couple – wearing serious expressions and deep in conversation. I wonder how on earth they can hear each other with the volume turned up so loud. But I’m not about to go and find out: it is clear they don’t want to be disturbed. Fortunately I had been able to speak with Domenico beforehand.

Domenico first took notice of dancing in first grade, when a friend tried to persuade him to come along to dance classes. At the time, though, Domenico was more into playing guitar. A few years later, he happened to see a TV report about competitive ballroom dancing and remembered his friend’s offer: “Something about dancing spoke to me. So I ended up going to dance class with my friend after all. From my first day, the teachers insisted I stick with it.” This wasn’t just because of the chronic lack of young male dancers in the class (girls had to dance with girls), but also because the then 12-year-old’s talent was unmistakable. Before long, dancing had sparked in him joy and ambition. A week-long dance training course led to participation in his first contests, where he achieved good results. “I was with partnered with my second dance partner for six whole years. That’s a long time in the dance world. We achieved a lot together, winning all the titles available in our age group.” And indeed, by just 18, Domenico had been crowned Baden-Württemberg state champion in the second-highest competition level, allowing him and his partner to be promoted to the top level. “My coach said I didn’t win the championship because I’m exceptionally good, but because I have a distinct dancing style, both in my expression and approach.”

These words come to mind as I watch Domenico glide from one side of the dance floor to the other, repeatedly pulling his partner towards him and pushing her away again. His facial expressions change regularly, alternating among highly focused to radiant, stern and passionate. It is one of those moments in which your perception of a person changes completely.

Domenico’s breakthrough into the championship level was ten years ago, but his unmistakable style remains the same to this day. Of course, a lot has changed in those ten years. And talking to Domenico, you don’t get the impression that these changes are restricted to his dance technique and physical development. Domenico answers some of our questions quickly and clearly. It all began when he was 12 years old. Then, at 18, he achieved entry to competitive level S. He has been dancing with his current partner for three years. Other questions, however, cause him to stop and ponder. You can tell from his eyes that his mind is hard at work turning over ideas that are difficult to express. Once such question was whether it’s possible to have at once both a dance partner and a life partner. He thinks carefully before responding: “How can I explain? It’s difficult. You know, every touch that takes place between a dance couple has meaning. When a man and a woman touch each other, which all partners have to do, it creates sensations. I spend a lot of time with my dance partner, often on the road. We both take dancing seriously and talk about it often and in depth. So I would say that a form of love always arises between a dance couple. And what partner would accept that from a romantic relationship?” 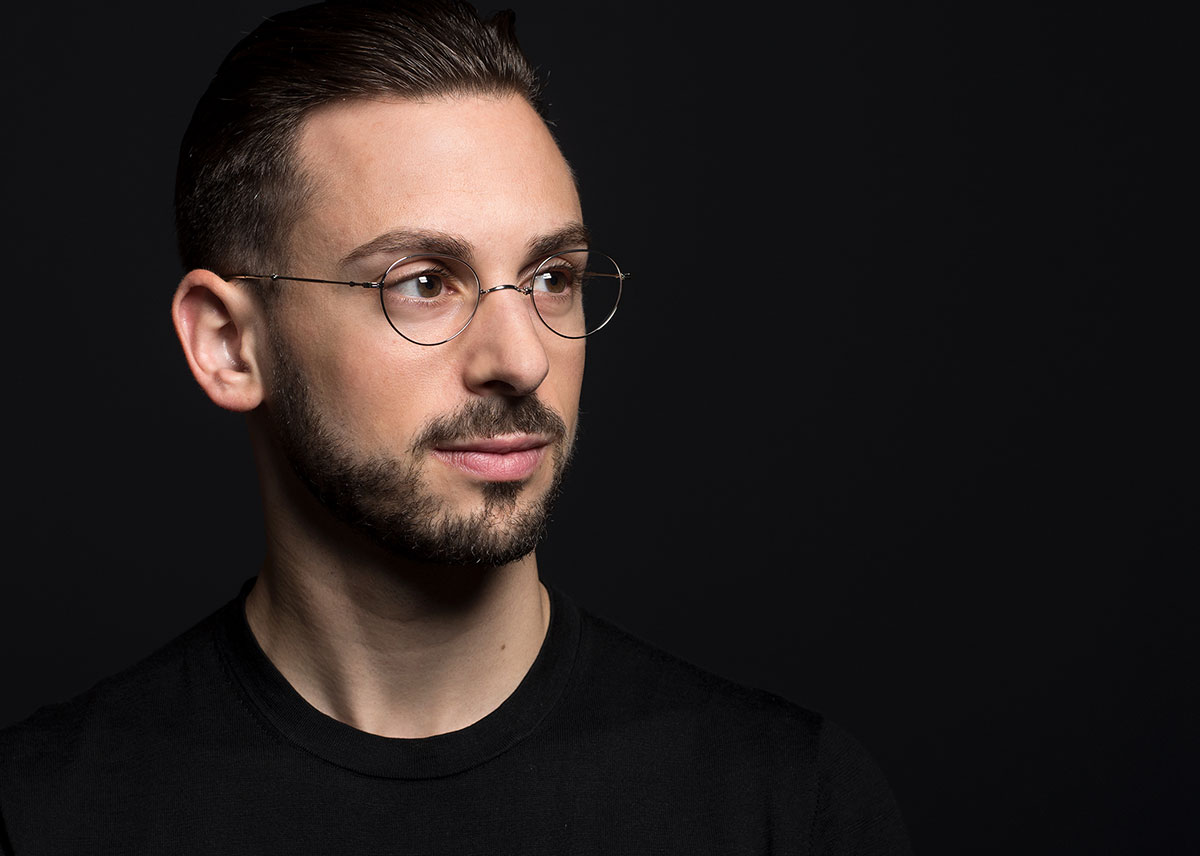 He would never be willing to give up dancing for a woman. Indeed, he would never give up dancing for anything. To stay in the running at this level requires a great deal of work, and Domenico and his partner train together five days a week, for two to three hours at a time. That doesn’t include the weekend competitions and all the travel they entail. You can’t do what they do without self-discipline and sacrifice, as Domenico has had to find out for himself. “I do sometimes stop and think when I see some of the stellar careers my friends from school have enjoyed. But dancing has always been my top priority – more important than school, than qualifications, than anything, really. I even had to give up my degree because of it. But this decision led me to do an apprenticeship instead, a decision that I’m very happy with today, having now worked for Lunor for 6 years and finding that this job goes hand in hand with my first passion.”

Domenico’s role at the premium spectacle frames manufacturer is to take care of wholesalers all over the world. When at the office, he can be found wearing a headset and pair of glasses – the latter of which he changes daily. And when things get busy, he is known to whirl about the premises as if on the dance floor, performing the occasional spin as he deftly manages his clients and orders. He loves his job, particularly when it involves direct customer contact at trade fairs. “If I think about professional dancers, people who earn their living through dance, I sometimes feel like I’m only doing things by halves. I will never be able to put in as many hours of training as those dancers do. But I need my job as much as I need dancing. These two sides of my life balance each other well, complement each other, even.”

The music stops and the sweaty air seems to fill with silence, broken only by sharp gasps. The dancers’ radiant expressions are quickly replaced by looks of intense concentration as the two begin analyzing their steps, figures and postures. I interrupt them, wanting to know whether they feel they make each other better. “Yes, we do. But when we first started out, it took me a while to accept her criticism and implement it, to understand that her honesty could only help me.” His partner smiles.

He also tells me that the interpersonal skills he has learned in this regard have helped him in his professional life, especially when it comes to dealing directly with people. “Dancing has a lot of psychological components to it, and it has therefore given me a very good understanding of human nature. I can adapt my behavior to different personalities and characters, knowing that you can’t speak to everyone the same way, and understand the importance of non-verbal communication. And I learned all of this intuitively through dancing.”

Managing a full-time job and a time-consuming passion for dancing requires a great deal of stamina. After work, Domenico heads straight to training. He is never home before 10 p.m. “I don’t know what it’s like to come home after work and just lounge about on the sofa,” he says, laughing.

Despite all the hard work it entails, Domenico cannot imagine life without dancing, which he describes as more than a passion. Asked to explain this idea, he comes again to a standstill. “Dancing is so complex. It liberates me, lets me to switch off. As soon as I start dancing, I don’t think about anything else. I am fully focused. It has also deeply influenced my mindset, my personality. Of course, I also feel proud to have achieved so much and to have received lots of positive feedback over the course of my dancing career, for instance from the German national coach. And this was despite the fact that I work full-time and dancing is ‘just’ a hobby.” He pauses for a while again, allowing his gaze to wander before stating: “I just wish everyone had something that made them as happy as dancing makes me.”