Glasses design: how the designers at Lunor work 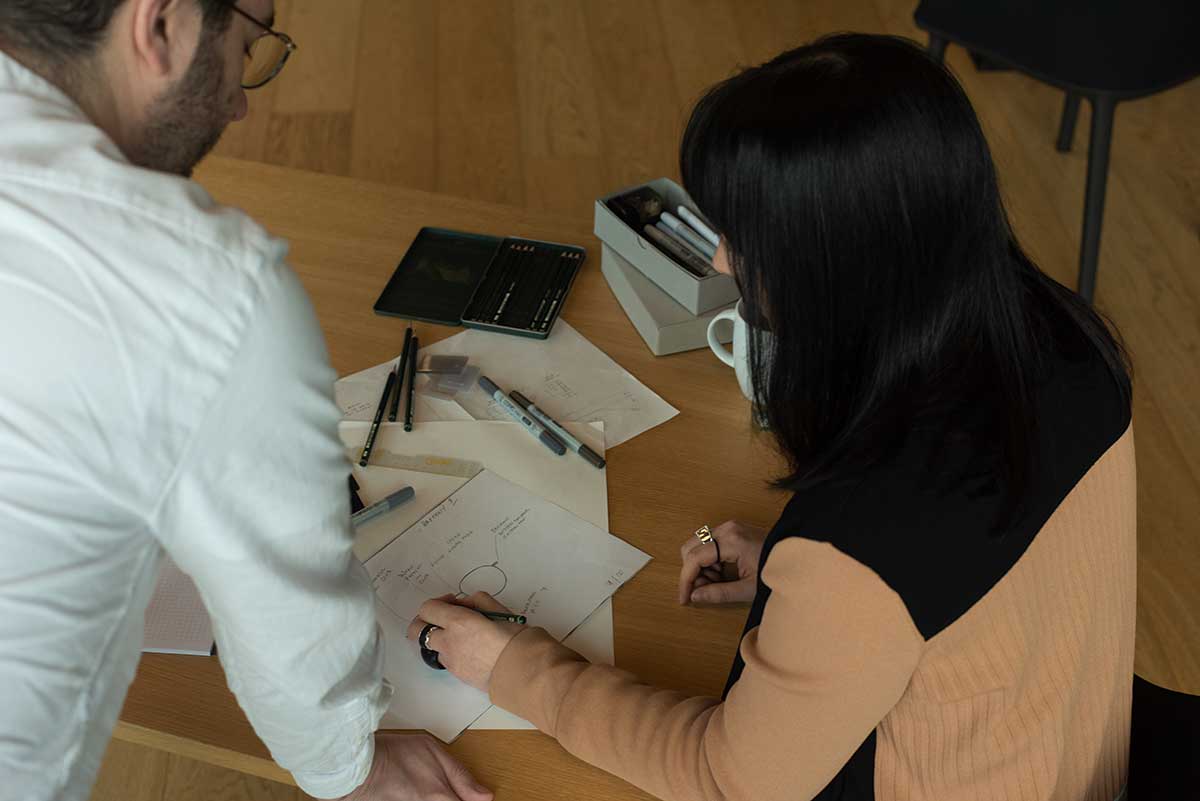 Let us take you on a journey to the origin of all Lunor glasses, to the moment of inception. Specifically, to a blank sheet of paper. For Lunor AG CEO Michael Fux and designer Anna, this is where it all begins.

In glasses manufacturing, the design process is well underway before the idea ever manifests, and a great deal of research goes into the first draft. “When you think about it, we’re constantly surrounded by inspiration,” explains Anna. “We each find our personal inspiration in our own unique way, and sometimes it finds us. In art, nature, architecture—it’s usually the smaller details that catch our eye and inspire us to create.” Michael and Anna need to have a good sense of the zeitgeist. They have to know what’s on everyone’s minds now and what will be on their minds in the future, and they have to take note of shapes and collect ideas for details and patterns. It’s not uncommon for them to travel through time, either. Lunor’s archive is home to one of the world’s largest collections of antique glasses, and collector’s pieces dating back anywhere from 1950 to 1650 are always being added to it and reinterpreted to create modern classics.

The insight gained from this extensive research finds its way into mood boards, drafts, and digital formats.

The search for inspiration leads to the first drafts

The first drafts are then created, with forms and details put to paper and those earlier ideas realized as hand drawings. Rather unspecific at first, they slowly take shape over time and become more and more clearly defined.

Lunor glasses are classic and timeless. Their frames are always delicately crafted and, with few exceptions, are designed for both men and women. “The phenomenon ‘A5’ continues to amaze me. It looks good on so many different faces and can be worn on any occasion,” says Anna enthusiastically.

As soon as the final design and models have been determined, a digital version of the glasses is created. This could be either 2D or 3D, depending on what the production method calls for. These plans are referred to when communicating and coordinating with the production team. This is where the actual product development begins. At this stage, the specific materials—like titanium or stainless steel—and colors are determined. 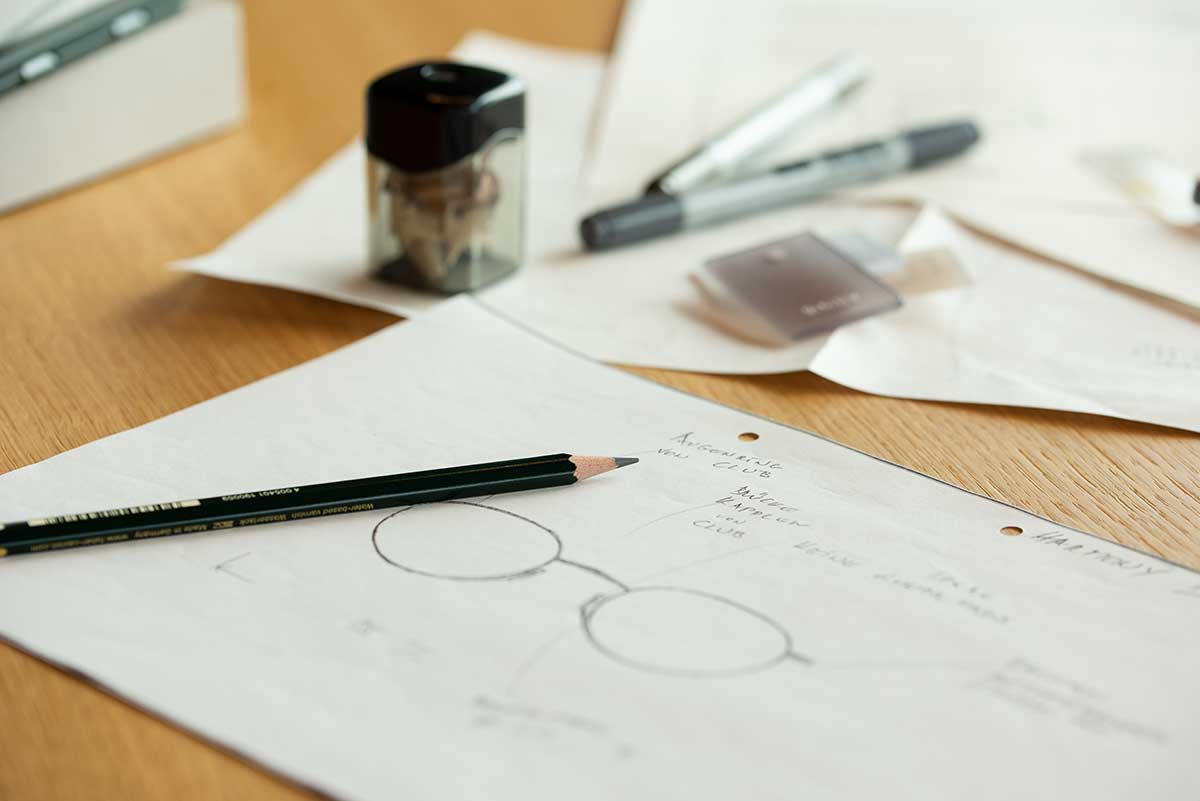 As soon as the final design and models have been determined, a digital version of the glasses is created. This could be either 2D or 3D, depending on what the production method calls for. These plans are referred to when communicating and coordinating with the production team. This is where the actual product development begins. At this stage, the specific materials—like titanium or stainless steel—and colors are determined.

Prototypes: must be 100% up to standard

Now we play the waiting game. It takes a few weeks for the production team to complete the first prototypes. When a prototype arrives, the designers’ idea becomes tangible and they get to hold it for the first time. “That’s always a great feeling. The first thing we do, of course, is try the glasses on.”

The entire Lunor team is usually involved in this step. To get a feeling for how they fit, the prototypes are tested on as many different faces as possible.

The quality is also tested at this point: Have the materials been processed to the highest standards? Does the frame sit correctly on the nose? Is it comfortable to wear? Is the inclination right?

If the glasses don’t completely live up to the designers’ standards, they will be reworked as much as it takes until all the details are just right. Thanks to our long-standing production partners, we rarely ever have to make any big changes. “If we do need to make changes, we go through as many prototyping cycles as is necessary,” explains Michael. “We never compromise on quality.” Only on very rare occasions is a design discarded completely.

Once a prototype passes muster, the design team gives the green light for it to go into series production and be dispatched to our partner retailers.

Beauty is in the eye of the beholder, so we asked the designers what their personal favorites are.

“That’s a tough one!” says Anna. Two come to mind. First, there’s the Lunor M12 in rose gold, which she recently got for herself as sunglasses. “I like the contrast created by the fine engraving with the embossing on the upper rim.” Then there’s the retro, panto-shape 501 model from the A12 line.

One of Michael’s favorite models is the Lunor XXV folding spectacles. “These glasses are in a class of their own,” he explains, marveling at their finesse. “We spent years developing the frame. Special care has to be taken when soldering each and every angle. The slightest deviation would become noticeable when folding them together and would render them useless, so they demand the utmost precision.”

Michael also has a soft spot for the Advantage models, whose ultra-fine, minimalist temple is based on the cable design. The ends of cable temples are rounded so that they nearly wrap completely around the ear. Weighing just 3.49 grams, the Advantage models are also Lunor’s lightest frame—lighter than a five-cent euro coin.